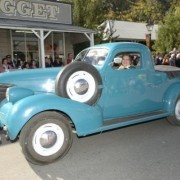 As the Arrowtown festival began to form it was decided as part of the now famous street parade to include some of the vehicles that had been preserved in the district. As the festival grew so did the interest from the local branch of the vintage car club who then organized a rally based around the festival.

Early gathering usually attracted about 35 or so cars from mainly southern areas, the owners really enjoying a weekend amongst the gold and friendliness that became the hallmark of the local festival.

A highlight of the 1987 parade was the return to Arrowtown of a 1912 EMF roadster that was built from some of the remains of the district’s first car, registered LK1 and was the property of the late Dr Thomson.  Also seen at early parades was the 1916 Buick tourer in beautiful condition that has always resided in Wakatipu, previously as property of the Sew Hoy family and now careful tended by current owner Bruce Jones in Arrowtown.

Due to the increasing popularity of the gathering each year the rally gained the name “Golden Times Rally” which it has to this day.  The “Golden Times” is now a national vintage car club calendar event based around the festival, attracting entries nationally.

The success of the event is undoubtedly the local flavor, dressing to the era, and a unique opportunity to explore the street and byways that many of us know and hold dear in beautiful Arrowtown.