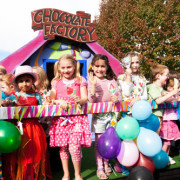 With a backdrop of historic buildings, heritage trees and blue sky, the focus of the festival has always been the parade – which , with its many aspects highlights the popularity of the week’s entertainment. Each year increasing numbers of visitors line the footpaths to get a glimpse of the floats, bands, cars and street entertainers.

Traditionally the Queenstown Lakes & District Pipe Band has led the parade with the pipes singing sweetly through the shade of the oaks and spectators often up to 7 deep lining the streets. OSH has had a hand in restricting the once popular lolly scrambles and at the same time awakening the committee to the realities of running a modern festival.

The Tin Lizzies (vintage cars) purr and sometimes sweat along their route, important in the fact that this is their main rally for the year and how appropriately they nestle down under the trees outside the miners cottages after their days work feeling quite at home.

The parade offers a chance for locals and retailers to create colourful characters and floats and promote their activity or business, as well as show off how lucky we are to be Arrowtowners. By Nigel Douglas