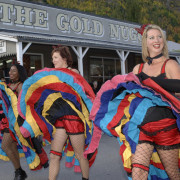 At the 1987 festival I was asked as president of the Arrowtown Pre School to put together a group of girl to serve super at the Ball and Hop. For the Ball we went dressed in black and white as servient girls for the upper crust and for the Hop we dress down as serving wenches that you would have found in the back street pubs. Due to this Barbara Cleveland was approached by Anne Currie to form a group of bar room dancers to take part in the 1987 reinactment of the Arrowtown settlement at the river in the November of that same year. At the time we were Bully Hayes dancing girls. Bully played by the late Peter Forward past publican of the Royal Oak Hotel, the late Bill Landreth was dance instructor, and I was Madame. We dressed in outfits hired from the Gore operatics which were a mixture of Spanish dancer and black and white poke a dot can can outfits. The Arrow Miners Band played the music. The following Festival we became the Arrowtown Buckingham Belles.

One funny I remember well was when we were leaving the Reserve in Nairn Street to travel along the far banks of the Arrow to the make the shift town that was being set up for the reinactment  behind Arrrowtown . The Belles were loaded onto this horse and cart that had seen better days, that is both the Horse and the Cart. We took postions where we could get a seat and hold on as a lot of the cart was missing ( OSH would have had a fit) and headed of down the hill to the river crossing all chatting. Then as we entered the Arrow River crossing we hit a rock the cart bucked, the floor fell from under the feet of some of the girl and a scream of fear and laughter rang out as we repositioned our selves with the driver telling us to shut up. The horse reared and speed up, thank god the horse had seen better days, and we carried on to the town as if nothing had happened

Meeting the Queen and Duke when they visited in 1992 was a highlight, with the dancing girls putting on a very colourful routine for them. Not many get to flash their knickers to royalty!

The Street Parade
Scroll to top