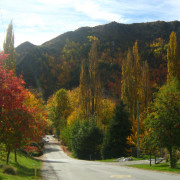 One thing that struck the early miners and settlers to Arrowtown was the barren landscape, devoid of trees. Many of these early townspeople had come from countries like England and Ireland where trees were a dominant part of the landscape. It is no wonder then that Alexander Innes, a prominent Arrowtown resident, and later mayor, formulated a plan to change all that. In 1867 he sought out some trees of English variety to form an avenue in Buckingham Street. Over the next ten years trees were planted in Buckingham Street, Bedford Street and Berkshire Street to form the structural planting of a town that is now renowned for its Oaks, Sycamores, Cork Elms and Ashes. Later plantings of flowering cherries and Rowans have carried on the tradition.

Arrowtown – A place born of gold
Scroll to top