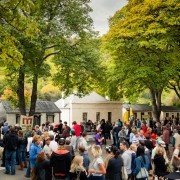 Arrowtown, born of gold in 1862, was once a thriving gold mining town.  Jack Tewa first discovered gold in 1862 in the Arrow River and soon after  miners flocked to town to discover their own riches. The population swelled to over 7000 as the Arrow River became known as one of the richest sources of alluvial gold in the world.

Many of the early miners lived in tents on the riverbank but after a flood in 1863 they were washed away and many lost their lives. Following from this disaster the town was built above the river.  Arrowtown still reflects the rich heritage of its beginnings today with many of the historical buildings having been preserved. It attracts many visitors for being a fine example of a living historic town.

Just 20km from Queenstown, Arrowtown is at the centre of the ‘Lakes District’. It has four very distinct seasons with the ice cold clear skied winter days and dry hot summers, with perhaps the most spectacular being autumn, where the tree lined streets and surrounding hillsides put on a breathtaking show of golds, reds and oranges. Arrowtown is now known nationally and internationally for its autumn colour and artists and photographers are drawn here. The people of Arrowtown celebrate with the annual autumn festival and visitors come in droves to see this stunning display of colour and kick their feet through the blanket of leaves.