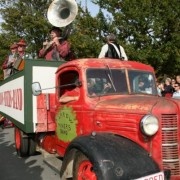 The Miner’s Band would have to be New Zealand’s most mature band, with a combined age of 655. Started in 1985, the band was originally called the Arrow Bush Creek Miners Festival Band. This later changed to Arrow Miners Band.

The first band played on the back of a 4-wheel trailer, loaned by Russell Jones, pulled by Don Simmers 4×4, and driven by Syd Arthur. A frame was built around the deck with the name ‘Arrow Bush Creek Miners Festival Band’ painted on both sides. Sometimes a BBQ table from the park was placed on top and we could all sit on it. Eventually the trailer became too small, so Joe Guise and Owen Marshall built a large decd, 2.4 x 4.8 that fitted over the trailer. New sides were fitted with steps at the back and an opening to load the piano through. After each festival it all had to be dismantled and stored under the landing at the Arrowtown Transport shed. The piano was bolted to the frame and a shelf made to fit the controls of the speaker system. Bill Purvis painted it, and David John did the sign writing.

In 1995, Noel and Alma Stevenson donated their 1948 Austin truck called ‘Old Red’. The deck from the trailer was converted to fit and stored in a borrowed hay barn ready to use for any occasion.

Since we have had ‘Old Red’ Les Rogerson has been the driver. The band has done lots of busking on the streets of Arrowtown, giving the proceeds to the Lakes District Museum to help paint the Post Office, the Mini Belles for new costumes and for funds to help restore our old truck. We have been given several pianos to use on the truck and now we have one fitted with wheels so it can be taken onto the street wherever we happen to be busking. By Barry Bain

Get Involved!
Scroll to top